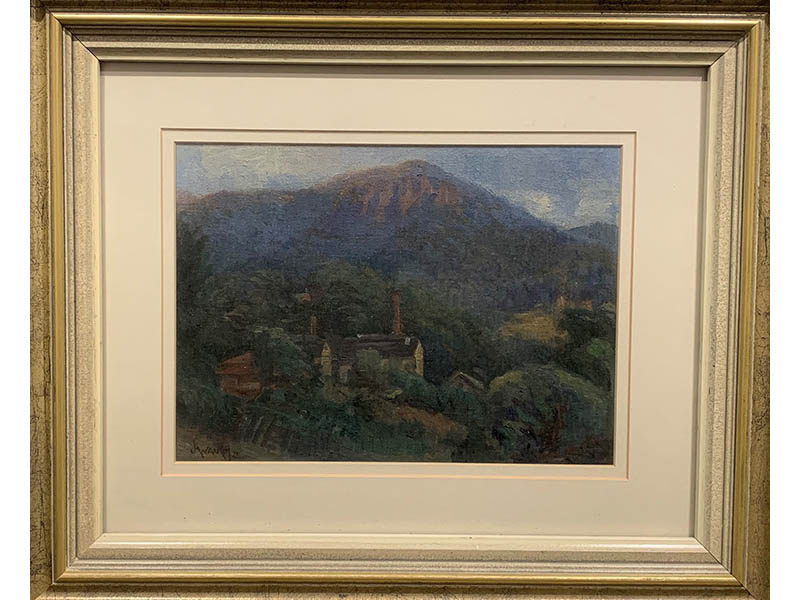 Painter, was born and apparently lived all his life at Eltham, Victoria. He mainly painted bush and country scenes, He spent some time painting at “Charterisville”, a community house at Heidelberg, with other members of the Heidelberg School. Waugh rescued the poet and writer C.J. Dennis when Dennis was living in drab penury at Melbourne in 1907, while the Gadfly was failing in Adelaide, and in 1908 carried him off to the camp Waugh had established in the picturesque highland settlement of Tollangi, some forty miles east of Melbourne. The pair lived in two weather-beaten tents, which Dennis dubbed 'The Hall of Hal’ and 'The Den of Den’. After publishing Backblock Ballads and Other Verses 1913, Dennis could afford to rent a weatherboard hut
While Waugh was in Melbourne in 1908 preparing for a solo show of his paintings, Dennis was set the task of collecting gum leaves to be painted up as invitations to the exhibition. Chisholm quotes Dennis’s verse and prose commentary on his collecting effort, , which includes: ‘But a poet in Collins Street without a shirt might easily be mistaken for an artist’. Much of Waugh’s art done throughout his life was destroyed in the 1939 bushfire