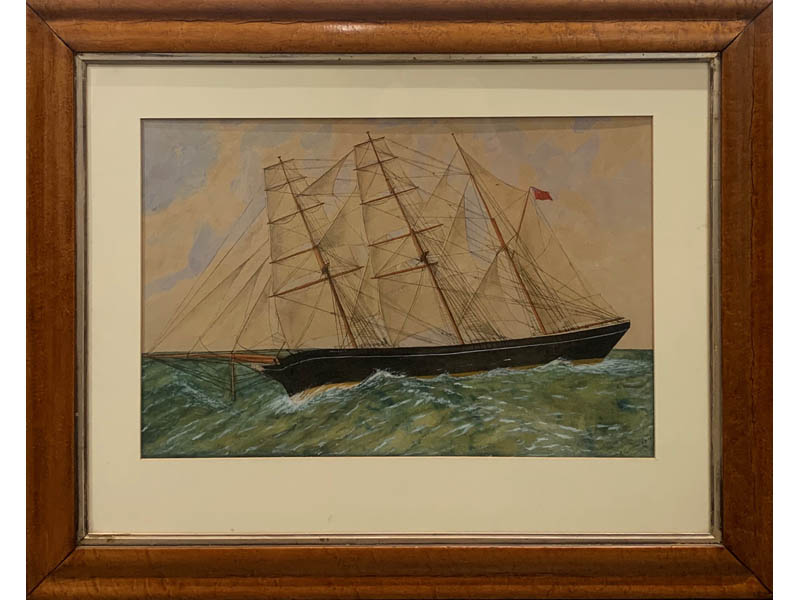 We were much gratified on Tuesday by an inspection of the new clipper ship Florence Nightingale, Captain J. C. Goss, which has just been added to the monthly despatch of the Eagle Line of packet ships sailing between Liverpool and Melbourne. The Florence Nightingale is an entirely new ship, of very fine lines and powerful build, and in securing her as an addition to the celebrated Eagle Line Messrs. Gibbs, Bright and Co. have dis- played their usual spirit and judgment. She is of large dimen- sions, and has great capacity of carriage both for passengers and cargo. Her length on deck, over all, is 210 feet, by 39 feet in breadth of beam, and 25 feet in depth of hold. This fine vessel has a top-gallant forecastle, a house on deck amidships, and a half-poop. These are all well proportioned to the vessel's size, and leave ample room for working the ship.
The principal cabin is under the poop ; it is of great size and beauty, and, being high in the ceiling, it is airy and comfortable, as well as very elegant and commodious. It is divided into two compartments, the dining and the after saloon, or ladies' cabin. Off these there open eight state rooms, capable of affording the most luxurious accommodation to sixteen saloon passengers.
The dining saloon is very compact, and well lighted ; it is hand- somely wainscoated in oak, with a white ceiling, the moulding of which and the cornice are of gold. The furniture is tasteful and rich, the whole arrangements conveying the impression of snug- ness and comfort. The after-saloon, or ladies' cabin' is a gem of great and rare beauty, fitted up in the first style of costly ele- gance. It is completely panelled round with polished mahogany, the panellings divided by rosewood pilasters of exquisite polish, with gold capitals, the cornice and ceiling mouldings being also gilded. The carpet and other furnishings of this boudoir are rich and in keeping with the general beauty of the apartment. The state-rooms are commodious, well lighted and well aired, and they are very tastefully furnished. The house on deck is divided into three compartments, the fore and aft one being allotted to the crew and ship's officers ; that in the centre is set apart for the cooking galley, which is amply furnished with every kind of culinary apparatus. The top-gallant forecastle is devoted to the accom- modation of that portion of the crew which has no berths in the house on deck.
The between-decks is entirely devoted to the accommodation of all the other classes of passengers except those in the saloon. For this purpose it is admirably adapted from its unusually great height in the ceiling, that being not less than 8½ feet from floor to beam, or 9 feet 4 inches from floor to ceiling. The length of the deck is 192 feet by a width of 34 feet. It is ventilated by two square ventilating shafts, has four hatchways, and two port ven- tilators, and is amply provided with light. The passenger accom- modation on this deck is ample and extensive, and will comfort- ably "put up" from 300 to 340 passengers.
Externally, the Florence Nightingale is a very handsome ship, of beautifully symmetrical form and trim rig. She is tastefully ornamented with gilded scroll work, and adorned with a well- designed and cleverly-carved figure-head, representative of the renowned philanthropist after whom she takes her name. Her bow is thin, yet roundish, combining strength with firmness; her stern is round, and she has a full, deep, and well-rounded waist. Her masts are tall and her spars large, and she carries a large extent of canvas, her form and rig conveying the idea of swift and steady sailing. She is 1450 tons register, which gives a carry- ing or burthen capacity of 3000 tons, and she is to be found in all respects in the same manner as the other ships of this celebrated line, by which Messrs. Gibbs, Bright, and Co. have acquired such celebrity. Before closing this brief description, it should be added, that the Florence Nightingale was built by Jonathan Stelson, of Boston, U.S., the builder of several celebrated ships, and that the whole of her standing rigging is of the best Russian hemp. As a test of her sailing qualities, it may also be mentioned that, on her voyage from Mobile, she frequently went at the rate of fourteen knots, or nearly seventeen miles an hour. She is to be despatched on the fifteenth of next month.
—Liverpool Journal, June 13.